Hey Doh, as mentioned elsewhere, on another forum what is the problem / symptoms of your brindle Boxer?

We've also had more than our fair share of dog related health problems through age / misfortune, but also some weird stuff that upon examination of the breed & play makes sense..

So what gives? let us see if we can suggest something that can either be remedied over the counter / vetinary maintainence dose / &, or DIY (..oh those grubby ears).
0 x
Top

It's progressing very rapidly. We were thinking that it was degenerative myelopathy but it is progressing way too fast to be that.

Now we are leaning toward brain tumor or spinal trauma.

This morning my heart was breaking to see her struggle so today might be the day.
0 x
Une étreinte est une étrangler vous n'avez pas encore terminé.
"Do not trust to hope...it has forsaken this land."
Top

Possible disc compression!? ..laminectomy $$$ & time, but if old, you know what is best of a bad choice for a boxer who is not designed mentally for trollies.

This almost certainly will affect the bladder too.

Dexomethozone (steroid) may give a few hours - 12- 24 , sometimes reverse things completely, sometimes just a short while.

How old is your brindle now Doh?

Chances are you know in your heart when you have to make "the tough call" ..it's a sh__y day, however we always take a goodbye pic just outside the vets, having booked for the needle, it does serve as a reminder exactly why we did what we did & why we will continue to think with their wellbeing as of the utmost importance in our minds.

We have had other dogs mourning the loss of other animals in our family pack, for a dog to dissappear we find more emotional loss in that.

Last time this happened to us (the needle) we brought the old mama home & laid her down on a blanket (& a bit of absorbant kitchen towel in case of a bit of leakage) in front of the woodstove (fuelled up) for the restof the evening & introduced the dogs who we did have to restrain & shout at a bit, especially the young pup of the bunch, but by the end of the evening they were ready & satisfied that she'd "gone" ..& so were we, it was actually cathartic for us too.

I am certain that a trolly would not be a good choice.

We have had her on prednesone. She does seem to do better when it is in her system but it causes her to be thirsty. The more water the more pee.

This was her just before I left for work today:

The "pred" family of steroids is the standard go to in a vets cabinet.

The drug I mentioned has a "chance" of better interception on a brain level than regular "pred" all depends on cost, & how far gone realistically, ...which is an emotive statement for sure.

How long has she been going downhill? ..& did you ever try her with a decent dose of garlic in her food, (minced shop bought stuff) ..our "pred" old girl's health was much better especially back leg mobility (the propulsion end) when she was having it daily with her cooked liver / heart, now "mainly" pig heart to go with her working dog biscuit.

The other aspect of pred was skin druff, & the like, we had her on pred a long time, as well as daily antihistamine for the itches etc (over the counter, & ranitidine (sp)!? indigestion tablets, ..over he counter).

is she chewing her paws up? (I can only see two which look clean & cool) from what I remember pred can raise the body temp & exasipate the itches etc, any wet skin abrasions? ..for seven she's looking grey, which might be genetic familial trait, or if on pred long term faster internal ageing, ...gym steroids, "dumb"

We got ours to 11 when she shouldn't have got to 3, (not the same issue but along the lines, ..which is why we place so much faith in lots of garlic, blood processing & cleansing, anti-bacterial properties, blood thinning, ...& that mobility that it gave our bitches hind legs back that otherwise would have had her put down 5 years earlier maybe, ..nothing ever proven, just kicked in & worked, now every wet meal has garlic.
0 x
Top

We have used garlic ever since we had our discussion a while back. Symptoms were first noticed 1.5 weeks ago.

She has not chewed on her paws at all.

I put a call into the vet to get some Dexo.

Thank you for the advice.
0 x
Une étreinte est une étrangler vous n'avez pas encore terminé.
"Do not trust to hope...it has forsaken this land."
Top 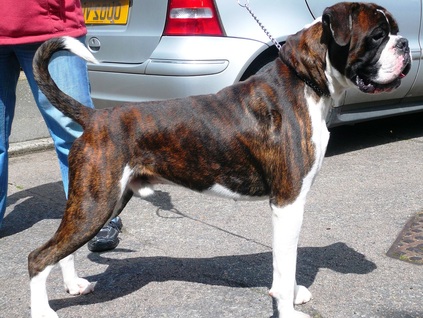 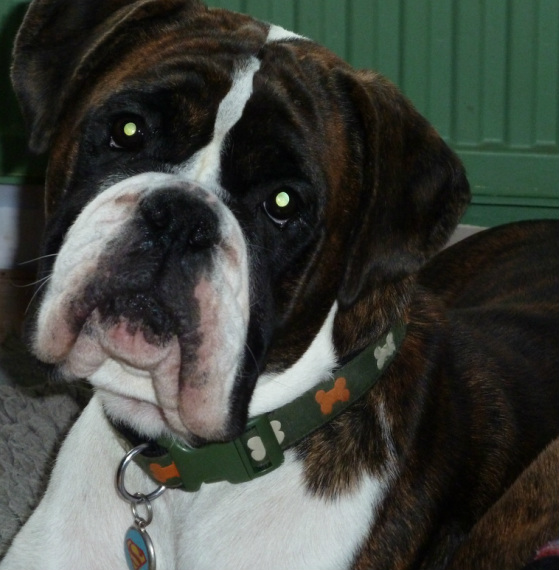 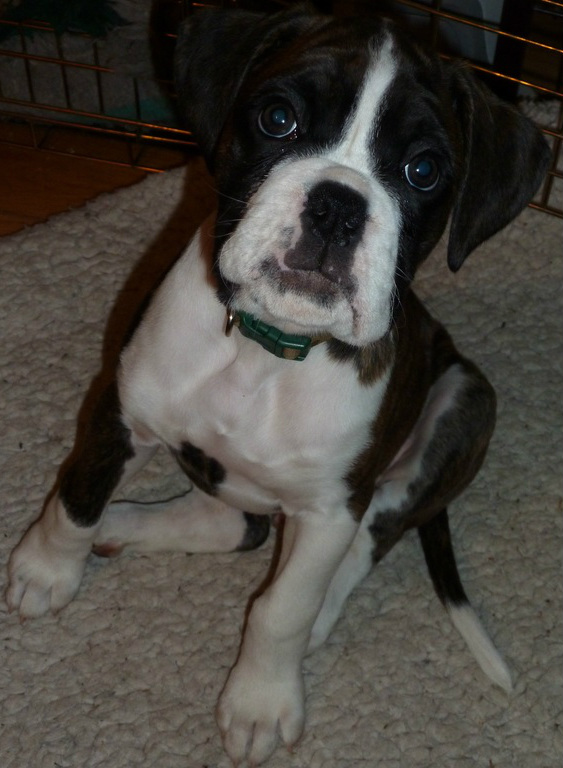 Dumb as a box o'rocks

That tail!? ...blood everywhere, looking at likely amputation the amount of breaks & splits it's had ...but his daughter hers is the complete opposite, like 2 of his. 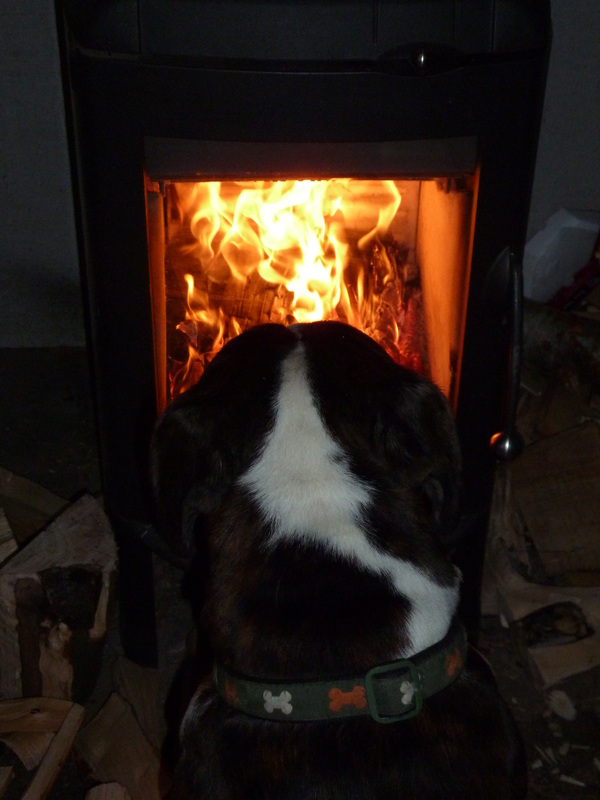 He howls & cries when the woodburner dies down, ..mesmeric!

good genetics, but bad luck, another one we are nursing along sadly.
0 x
Top

I was accosted by someone once for the docked tails of my pups. (completely common here in the States) Clipped ears...different thing all together. Ruger Booger, (my white in my profile pic), had a Mast Cell Tumor on one ear and it was the most traumatic thing we have ever gone through as they like to shake their heads.

That person obviously has never seen a split tail and how hard it is to get to heal.
0 x
Une étreinte est une étrangler vous n'avez pas encore terminé.
"Do not trust to hope...it has forsaken this land."
Top

On the subject of the other "head shake thing" amongst boxers.

Our boy (as pictured) does it from time to time, which worried us more than him, some dogs wake up & are shaking in the head, as you know,..

I watched a few videos, we have muscley dogs who know how to play right!? (rough, body slams, lots of fighting (play) for possession of the TP roll tug rope etc, ..yes!?

Well we simply measured the difference between letting it happen (no intervention, as no distress was involved on his part) ..vs neck massage.

With neck massage (thumbs & fingers) it stopped far sooner, often within 60 seconds or so, & significantly lessened frequency with intermittent massage around the neck & shoulders, esp the neck.

Our bull breeds do play from the neck, so i'm convinced that some of this is trapped nerve simple as that, like we all get when we overstretch, not all of it mind, but enough to cloud certainty of one over the other.

A boxer won't rest when in pain like a human would.
Also give a head shaking boxer a treat & it in all likelyhood (depending on severity seems to click the dog into a "stop" as they concentrate on the treat, have seen this in a video too).

..With regards to the dexo, "it's a chance" ask for an I.M. ) intermuscular shot rather than pills, estimated 10milligrammes int the area, ...it's a chance, not guaranteed, shot gets into the system quicker, & 10 mg seems to be the optimum dose.

If it's a compressed nerve dex will help with inflammation around it.
If it's a tumour in the brain, it's used in humans with secondary brain tumours to relieve symptoms, ..then it's wait & see, IF it does nothing, there is no point in a second shot!

Best wishes to all the family, & fingers crossed.
0 x
Top

Update. When I left for work and she couldnt walk I gave her some pred.

Got home just now and she is chasing squirrels in the back yard. Still dragging the foot but much improved. At least there is some hope.
0 x
Une étreinte est une étrangler vous n'avez pas encore terminé.
"Do not trust to hope...it has forsaken this land."
Top
Post Reply
28 posts

Return to “Anything Goes”

Jump to
Powered by phpBB™ • Design by PlanetStyles